It was back in 1998, when I had been at cap for just over ten-years that I went on my first Suzuki Jimny launch. This was the third generation of Jimny, as the original was launched eighteen years earlier in 1970. But the MK3 was the first to be called Jimny, previous ones were called different names around the world. In the UK we had SJ410 and SJ413, in Australia it was called the Sierra and all sorts of names. But in 1998 Suzuki decided to standardise the Jimny name, and so it still remains. The previous car hardly changed in 20 years, and has the longest production run of any modern car. Over 2.8 million Jimny’s have been sold worldwide, with more than 42,000 sold in the UK.

The all-new Jimny is, believe it or not, 30mm shorter than the 20 year old car, but is 45mm wider and 20mm higher. The current car looks small, but the new one is even smaller, but looking at it, it does look much larger. The extra width is welcome, and you do feel that extra space for shoulders. There is enough room, just, in the rear for two adults, but the boot space is as expected restricted, get three or four bags of supermarket shopping in there, and it’s full. I doubt you would get a suitcase in it. 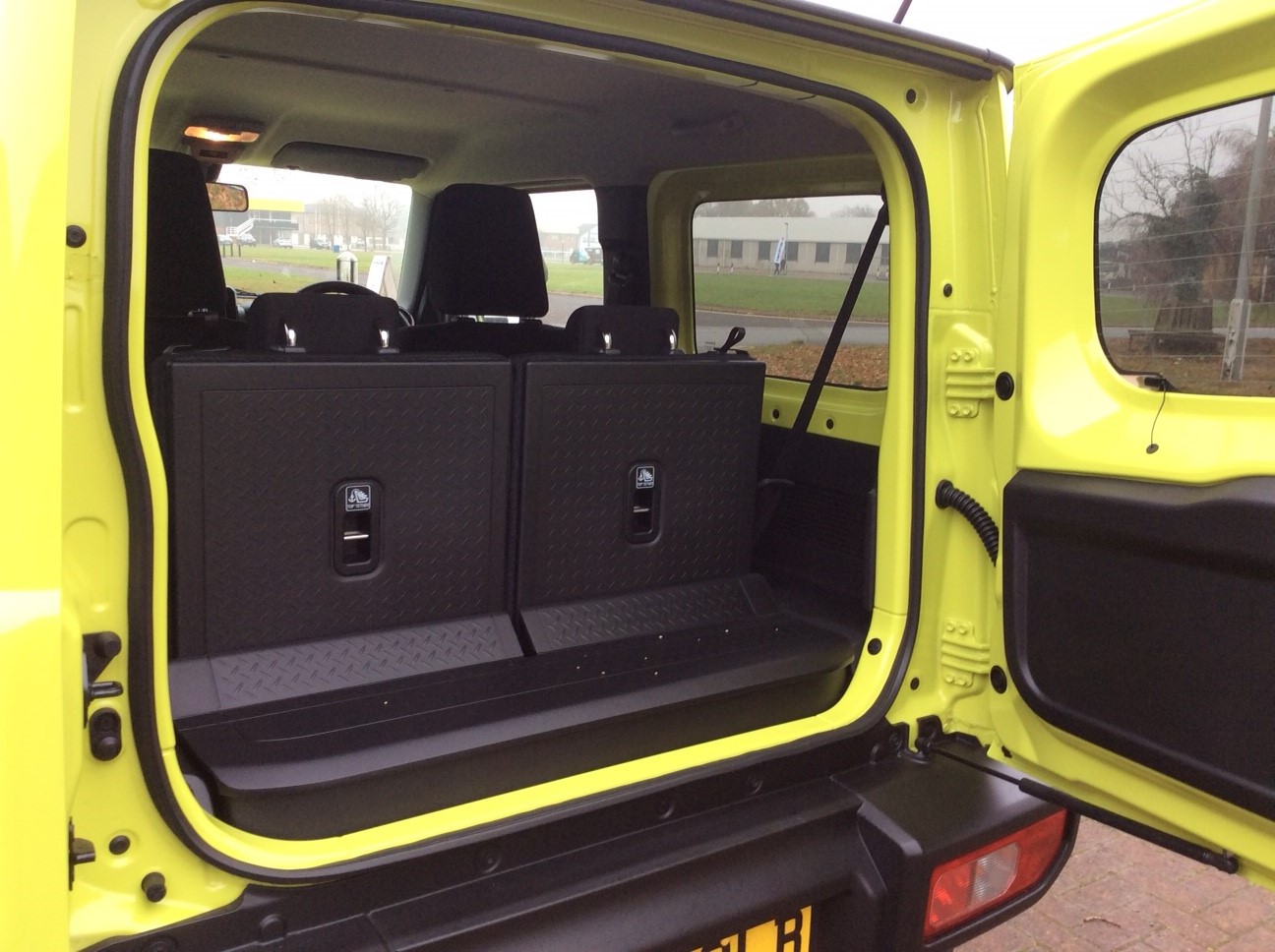 But boot room is not necessarily the reason why people buy the Jimny, it is the one-and-only, small, lightweight and 4WD vehicle. This new Jimny retains its traditional Ladder-frame chassis for optimum off-road performance. The body frame torsional is now 1.5-times higher than the current model which enhances on and off-road performance.

We started the testing of the Jimny near Daventry and went through some very pretty small villages, on country roads, dual-carriageways on a whole variety of road conditions and surfaces, and it proved to handle them all very well, went over the bumps well, and was generally a fairly comfortable place to be, considering it is so small and has rugged underpinnings. 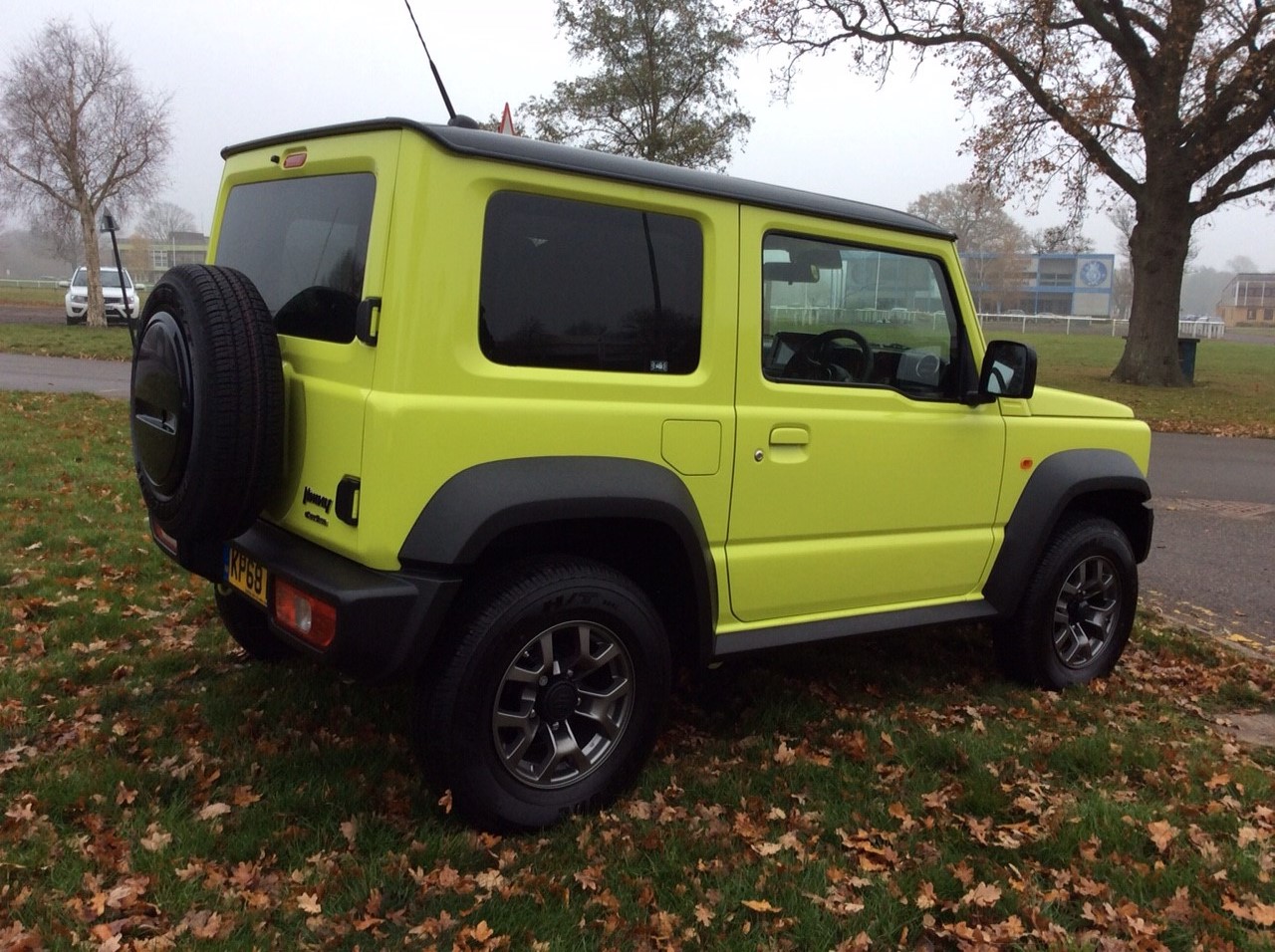 The new Jimny is powered by a 1.5-litre 4-cylinder petrol engine, replacing the 1.3 that proved ultra-reliable, but no doubt this new one will be just as good. It is quiet, and has more than enough power. This engine produces 101ps, a top speed of 90mph, but no 0-62mph figures are available yet. Suzuki have released the C02 figures for both NEDC and the new WLTP and show what big differences we can expect: NEDC 154g/km – WLTP 178g/km. The Jimny is available with either a 5-speed manual or 4-speed automatic. 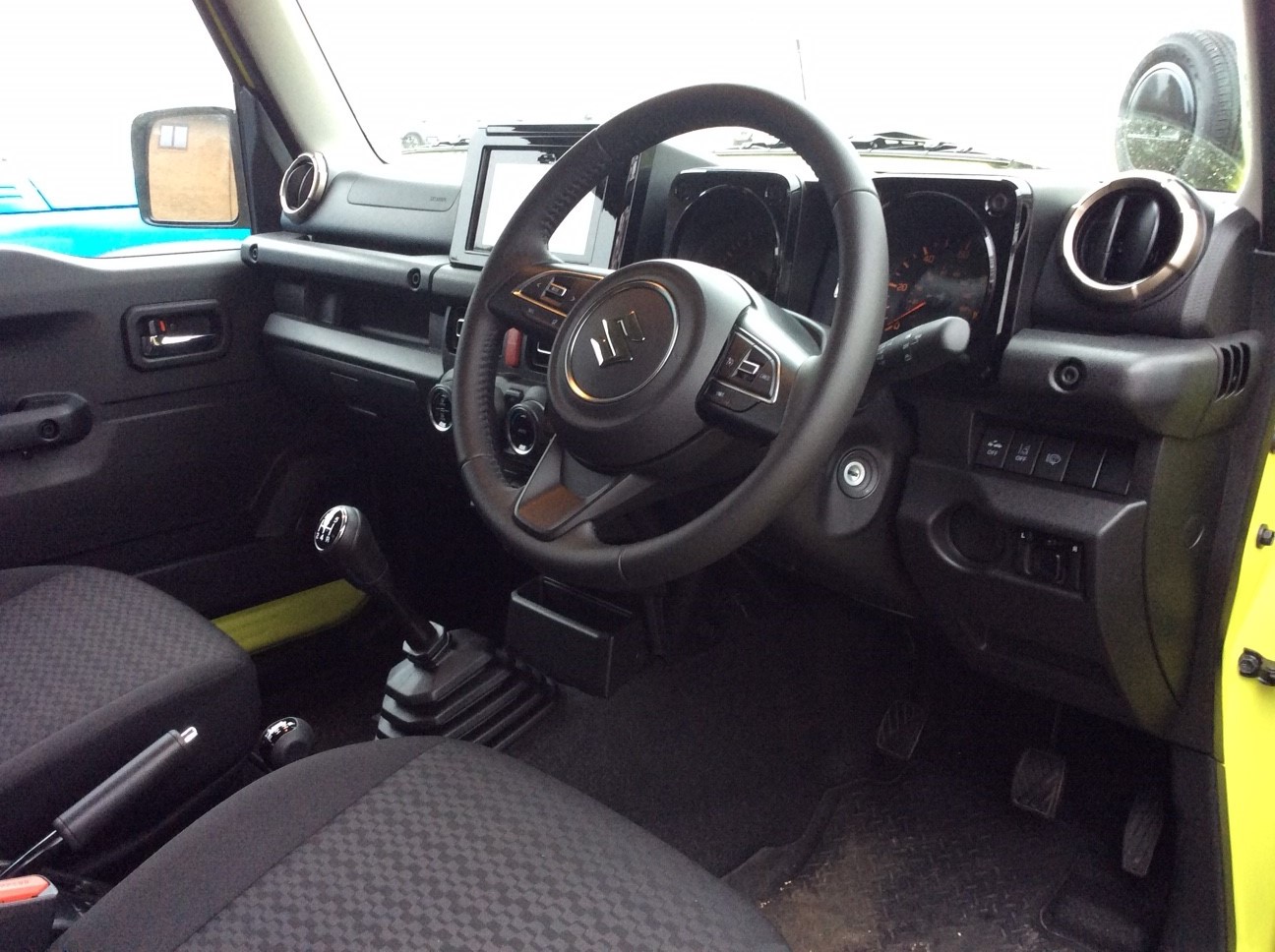 After the on-road driving, we went to a very muddy off-road section, and after plenty of rain, the conditions were pretty awful. So wasn’t looking good for testing the AWD system, it did look a bit too much for this small car. But we put the selector into 4WD-Low, and off we went, nice and steady. The interesting thing about the Jimny’s AWD system is that you put it into 1st gear, and don’t touch the accelerator or brake, all you do is just steer it. It finds its own grip, and speed, and goes up and down any hill, at its own speed. Quite scary to begin with but you soon get used to not touching any pedal. It was amazing just how well it did in very precarious conditions, whether going up or down steep, slippery hills covered in thick mud. It has Unimog capabilities for the price of a small hatch.

The exterior is very bold, and from a distance you could mistake it for the larger Mercedes G-Wagon, or a JEEP. The designers have certainly taken some styling cues from other well-known off-roaders. But it does look good, purposeful and looks ready for action in any conditions.

The only problem I can see with the new Jimny, is the simple fact that Suzuki GB will not be able to get enough vehicles to supply customer demands, as it will be very popular.