The first thing to note about the all-new Ceed, is the fact that the ‘comma’ has disappeared between the ‘e’ and the ‘d’ – it was Cee’d, but now it’s just Ceed.

Like its predecessors, the ceed has been designed, developed and engineered in Frankfurt by KIA’s European design, product, development and R&D teams.

We flew from Farnborough in a fairly small jet, and landed into Zilina airport, more of a short airstrip than an airport, and were greeted by many locals who were there to take photos of the plane landing. We did have to fly over the airfield a couple of times so the Captain was sure he could actually land it there.

Zilina is the home of KIA’s very modern European plant where this new Ceed will be built alongside the Sportage and Venga models.

The UK registered, right-hand drive cars were lined up outside the small terminal building, and ready to go. A choice of engines to drive, though the 1.0-T petrol was not available. But the 1.4 T petrol and 1.6 CRDI diesel were there.

We set off from the ‘airport’ and went on some pretty good and well maintained roads, and eventually finished the route in the High Tatras in Slovakia, 1,346 metres above sea-level, a very popular location for skiing in the winter, and walking in the warmer months – a very expensive place to stay but it does have stunning views.

After driving both the 1.4 petrol 138bhp and the 1.6 diesel over the two days the petrol would be my first choice, so smooth and quiet, and more than enough power.

The Ceed is quite an unremarkable five-door hatch, but it does a lot of things right, in fact it does everything right. It’s design is bang-on right, nice lines, clever styling and looks very modern, and very different to the previous car. The Ceed is well put together, with unusually high levels of quality in the materials used, and fit and finish up to a high standard.

But the Ceed does not have the wow factor, when you see it you don’t automatically want to rush out and buy one, but those that will, and there will be many thousands of them, will be thrilled with their new car, and when they hit the used car market, you can be assured that they will be as good in many years to come and just as reliable as a new one is today.

A little known fact about Slovakia is that the country employs over 125,000 people in the motor industry with car production topping over 2-million vehicles, from manufacturers including KIA, VW, PSA and Jaguar Land Rover.

The KIA factory employs 3,800 people, it has 360 robots and makes 1,400 cars per day. The press shop produces over 5-million panels and components per year and 2,475 engines every day, which are used by KIA and Hyundai.

This all-new Ceed is lower, wider, and with longer overhangs than the car it replaces, and does now look more in proportion, and with its strong shoulder line does give it more presence. 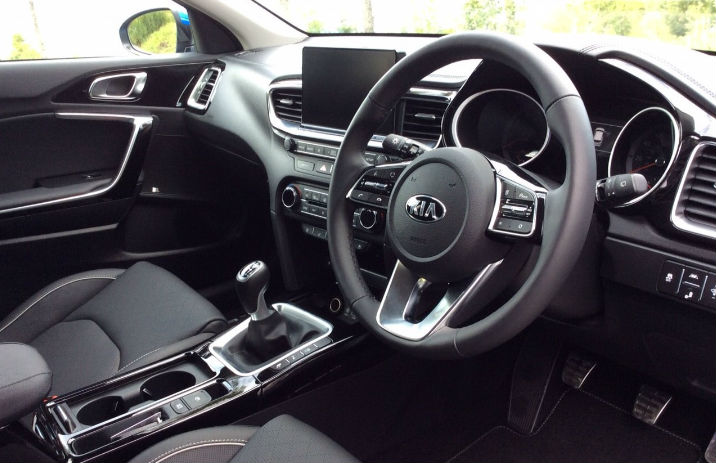 The interior receives architecture from the most recent KIA vehicles, mainly from the Stinger and the dashboard is spilt into an upper area- for the ‘floating’ touchscreen infotainment system. And a lower level, housing controls for heating and ventilation and audio.

This new ceed which is constructed on KIA’S new ‘K2’ platform has been tested exclusively on European roads, including the UK. The ride and handling certainly suited the roads in Slovakia, and I’m sure will be just as comfortable and rock solid in the UK.

Safety has not been forgotten, as the new Ceed is packed full of features, including seven air-bags, high beam assist, Driver attention warning, lane keeping assist and forward collision warning. But new for KIA is Lane Following Assist which tracks vehicles in front of the Ceed in traffic and identifies appropriate spaces in other lanes to move in to safely and gain more ground in heavy congestion. It also detects road markings to keep the car in its lane on motorways and controls acceleration, braking and steering depending on the convoy of vehicles, and operates between 0 and 81 mph

This new Ceed is a good choice for those who want a well built, reliable five-door hatch. The estate version is due later.