When I first drove the Toyota Camry last summer, it was on a test track facility near Barcelona. Sat on the plane on the way to Spain, I did wonder why on earth I was going, to drive a large Toyota with a 2.5-litre petrol engine, and carrying the Camry badges that have absolutely no image whatsoever in the UK. Why were Toyota wasting their money on this trip?

On arrival to the track there were just a couple of Camry’s sat there, all shiny and looking like a large Toyota. It was three to a car, driver, instructor and back seat passenger. On the first run, I was in the rear, and first thought was, there’s plenty of room in here, very nice.

Then it was my turn to drive, it felt very capable, and for a large car went round the corners on the track well, felt safe and solid. But we didn’t get chance to really see what the car was really capable of, in normal driving circumstances. 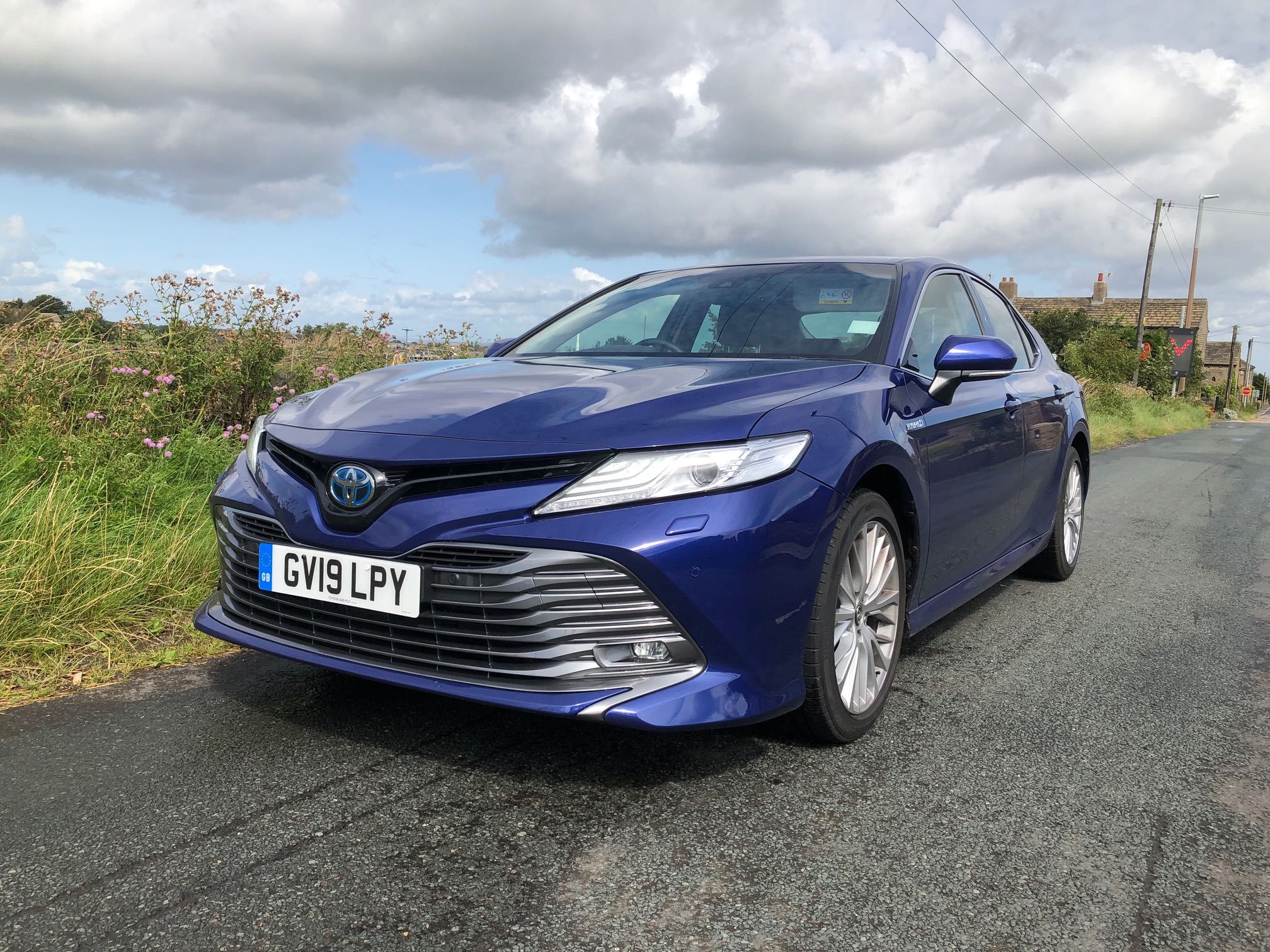 Fast forward a few months, and Toyota GB sent a test car up to Huddersfield for a few days. A bright blue one arrived, and the delivery driver was full of praise of it.

The initial reaction is just how much room there is, loads of rear legroom, plenty of shoulder room for three rear passengers, and enough headroom for the tallest person. The quality is tip-top throughout and as good as any premium British or German saloon, and leather seats are standard on the Camry.

The Camry has had a long and successful life, starting in 1979 where it was originally known as the Celica Camry, but in 1982 the Camry badge was standalone. In its history it has been a narrow body, a wide body, and different lengths depending on the market. The United States and the Middle East love the Camry and bought them by the bucket-load. But Europe fell out with it many years ago, and so it hasn’t been available for 15 years – but now it’s back. 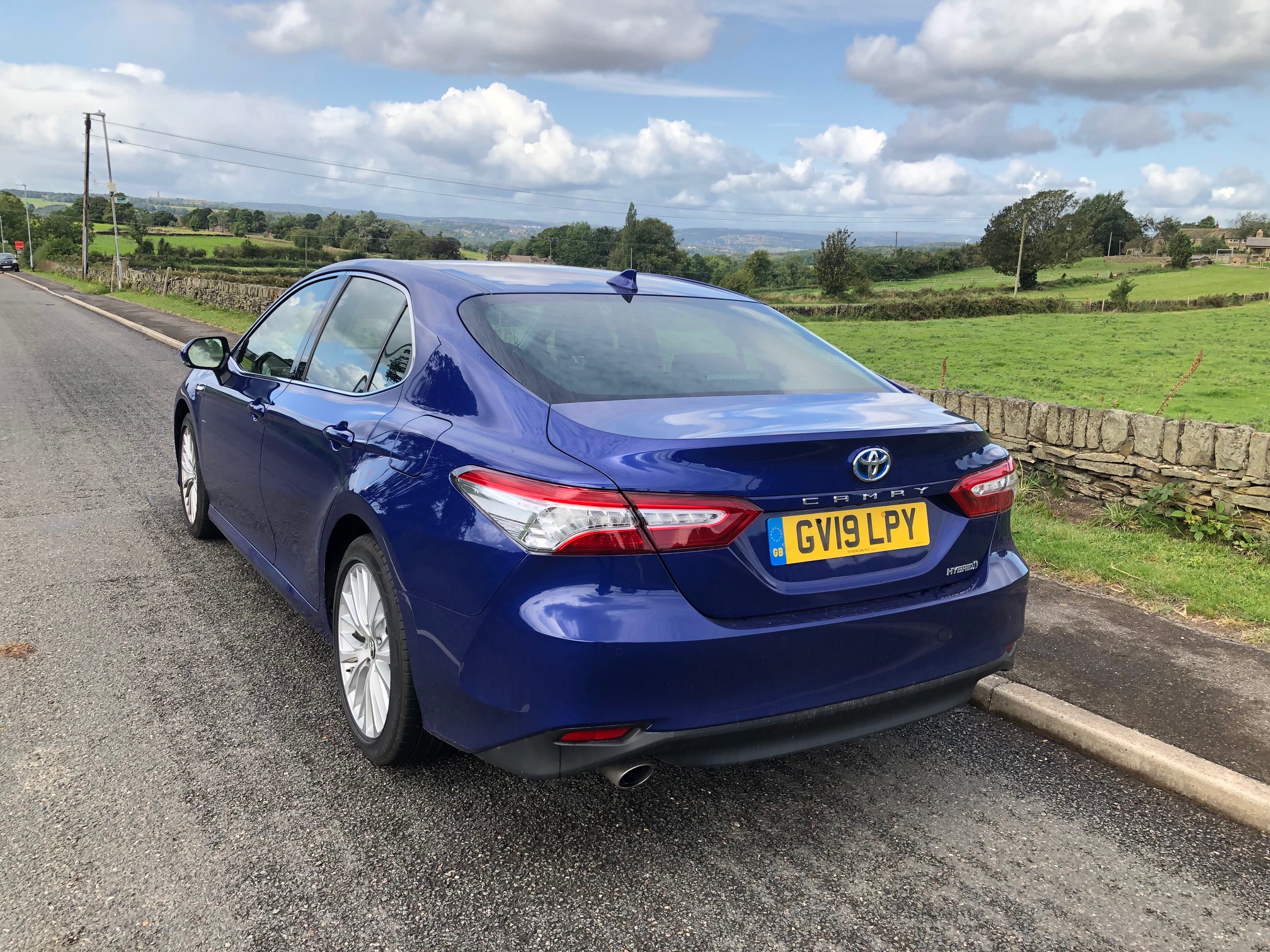 The Camry follows now in the tradition of all Toyota’s powertrain policy. It is powered by a four-cylinder 2.5-litre petrol engine and a small electric motor and battery that produces a combined total of 215bhp. The power is sent to the front wheels via a CVT automatic gearbox. It has a 0-62mph of 8.3 seconds and a top speed of 112mph, where allowed. CVT has had good ones, and not so good ones, and the CVT in the Camry, is about as good as you’ll get.

But it is the Hybrid system that is the clever bit, and something we didn’t get to test, or try in Barcelona. On the centre of the dash there is the normal screen, that operates everything, including the radio, phone, sat-nav, heater etc. But on Toyota Hybrids you go to the ‘CAR’ button and you can see exactly what is happening to the cars power systems in an instant.

There is an image of a large battery, the petrol engine, and how the energy is flowing. When you press the Start-Button, there is no sound, except for a ‘beep’ that tells you the car is ready to go. You press the accelerator and off it goes, quietly and quickly. And on the screen you just see power going from the battery to the wheels. After a short while, the engine fires up, and takes over. The starting of the petrol engine is so quiet, and effortless, you just do not hear, or notice it. 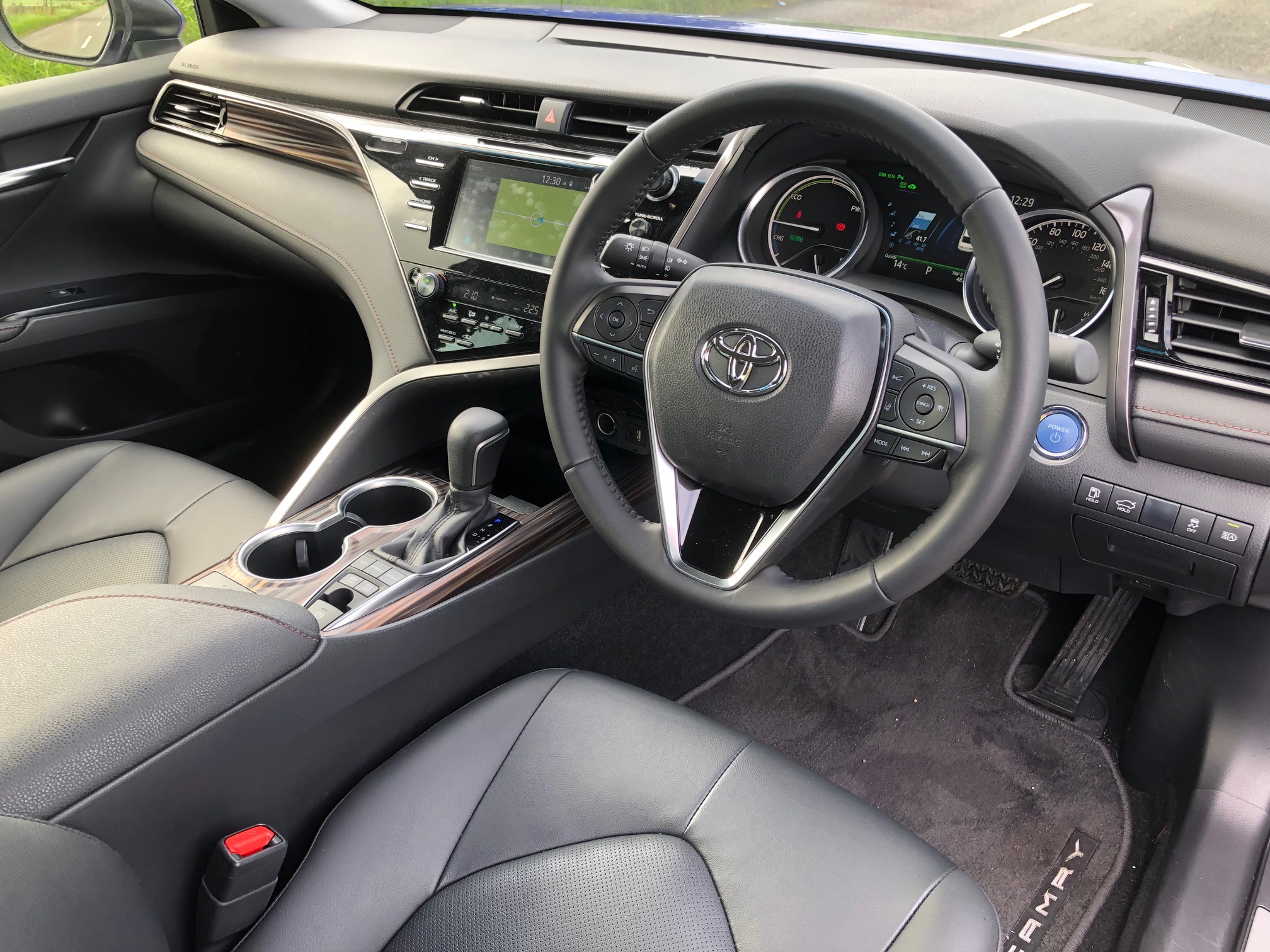 If you come to a slight downhill, and take your right foot off the accelerator pedal, the engine immediately cuts out, and any energy goes into the battery, effectively charging it up. This power is saved, and used when it is needed. Every time you brake, the same happens, engine stops, and charging commences.

On the few motorway trips I did, the same happens, if you are up to motorway cruising speed, and take your foot of the accelerator for just a few seconds, engine stops, and the energy goes straight to the battery, so nothing is lost. Every bit of what would normally be lost electricity is kept, for use later. This power in the battery is also very useful if you need to creep in home, up your road and drive either late at night or if you are leaving early in the morning. You simply press the ‘EV-Mode’ button and it stays in pure electric for as long as you want, or until it runs out of electricity.

During the time we had the Camry it achieved 55.6 mpg, over a wide selection of journeys, on different roads, at different speeds, a good result for a large saloon with a 2.5-litre petrol engine. 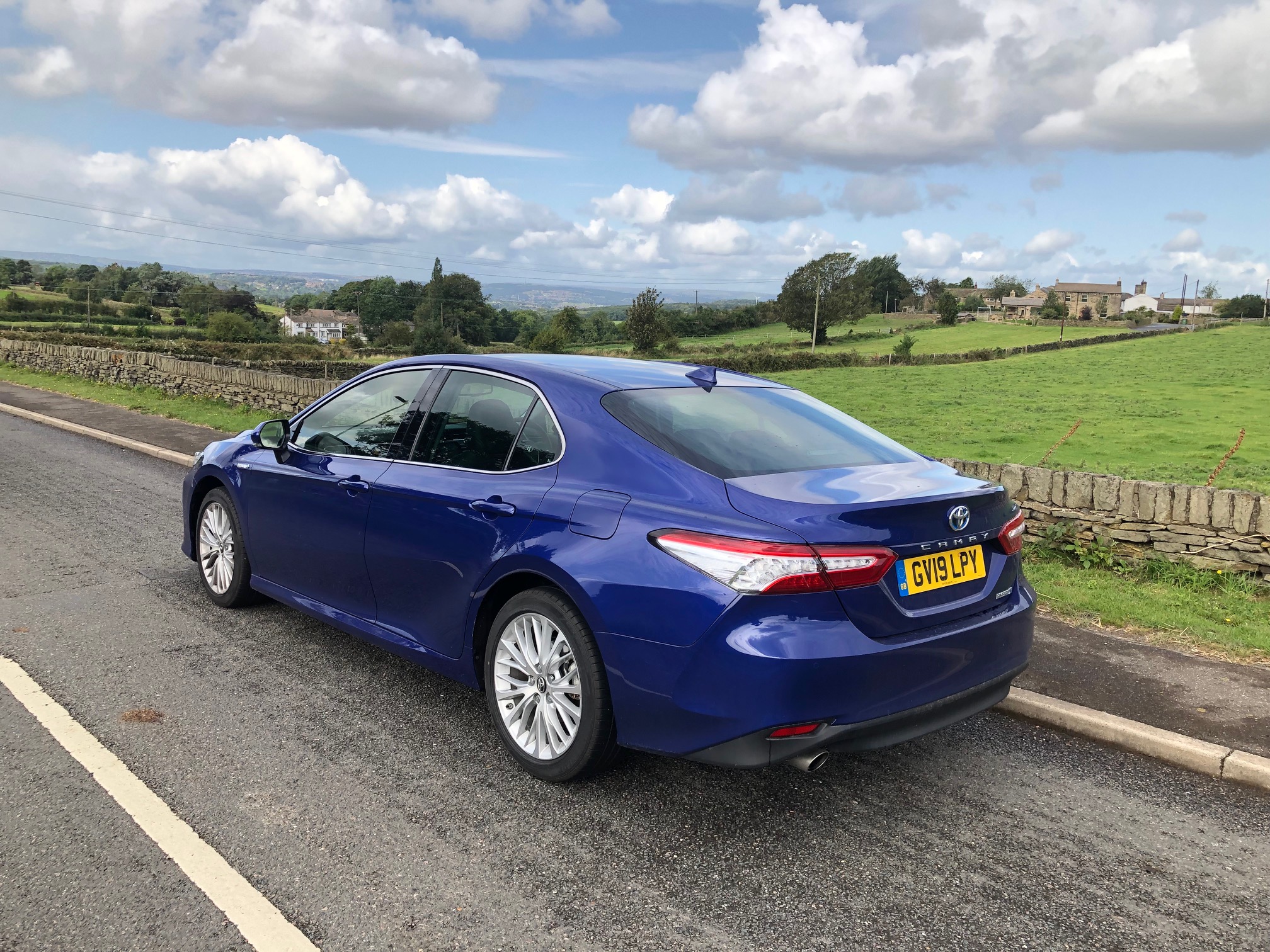 The Camry’s boot is vast, and it is deep as the Hybrid systems batteries are under the rear seat. And if something is in the boot, right at the back, you almost have to climb into it to recover any lost shopping or parcel, it is that big.

It is full of standard equipment, the list is too long to mention, but like the Hybrid system, the kit will last forever, with little chance of anything going wrong, it is a Toyota, so will be ultra-reliable

Does the Camry have any real competitors, well it does, but from different and a wide spread of manufacturers. It is almost as big as a 5-SERIES, but costs less than a 3-series. The Mondeo Hybrid, the Plug-In Passat, Superb, or even the Insignia, though no Hybrid versions of the Skoda or Vauxhall…

The exterior design is crisp and a handsome looking large saloon. The front end is very bold, it is a good looking car, and did attract attention during the time we had it.

The Camry has been a huge success over the years for Toyota with 19 million being sold in 100 countries. But not really a big hit in the UK, but this new one could change that, although Toyota GB say they do not intend to bring many into the Country, but the ones they do, should sell well, as it is a great car to look at, great to drive, economical and has that very clever Hybrid system.