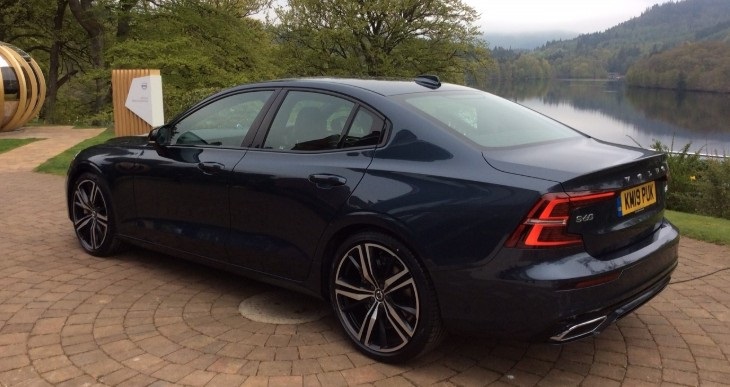 Up to Edinburgh airport, where the S60’s were lined up and ready to go.

We did not have a choice of which model or engine we wanted to drive, as there is only one model, and one engine at launch, so we jumped in a R-Design Edition fitted with a 2.0-litre petrol engine.

This new saloon is going into battle with its main competitors the Audi A4, BMW 3-Series and Mercedes Benz C-Class, to name just three. All of these cars are good looking, and very desirable, and have really had the market to themselves for many years, but Volvo really do have a chance of being up there with this handsome new saloon. 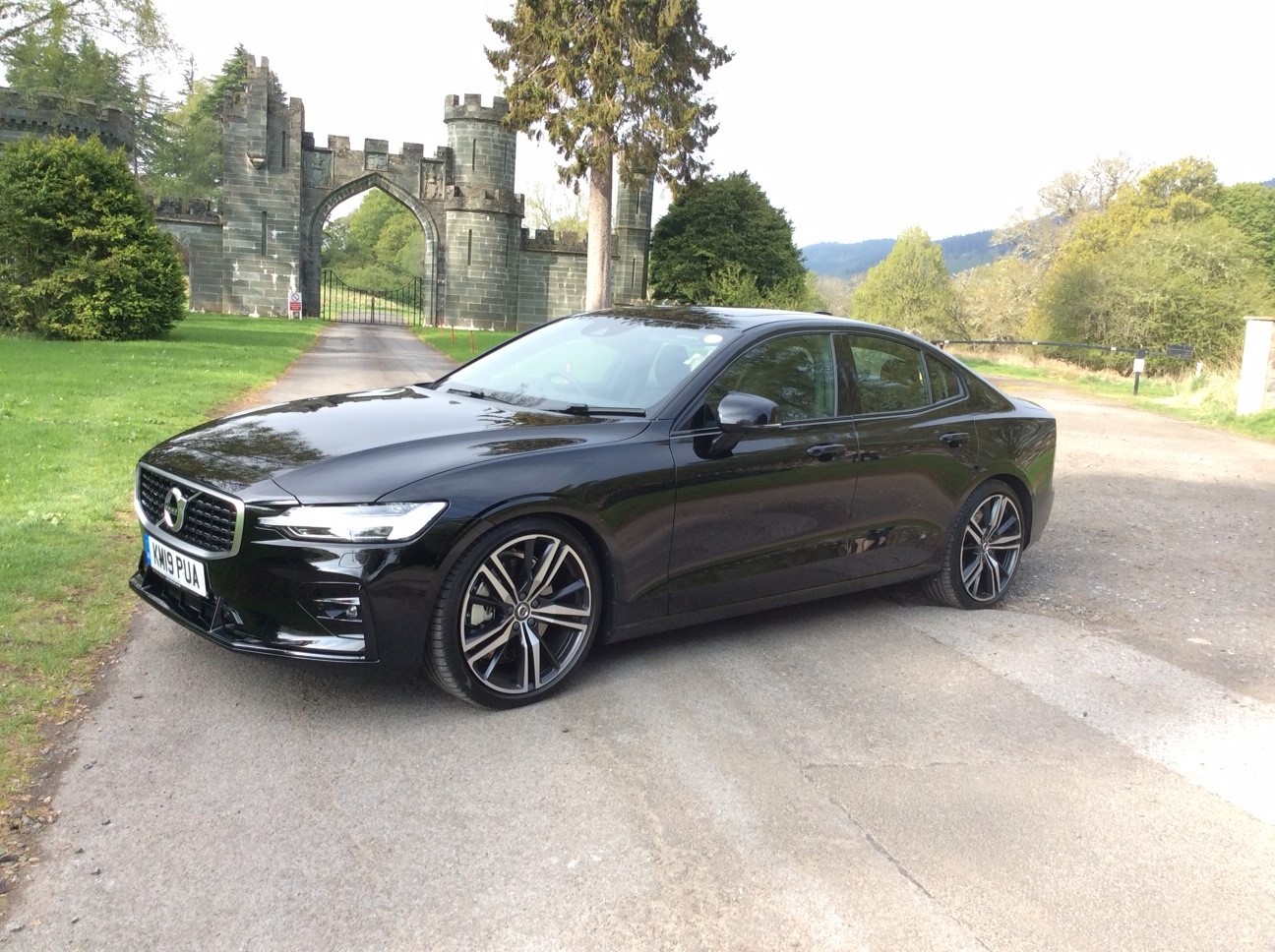 But this saloon from Volvo will not be available with a diesel engine, not now, not ever. It is fitted with a 1,969cc petrol engine that produces 250hp, goes from 0-62 mph in 6.5 seconds and a top speed of 145 mph, where permitted, which is virtually nowhere. A two-litre petrol T8 Twin Engine which is a plug-in Hybrid may join the line-up sometime in the future. The non-Hybrid are front wheel drive, whereas the Hybrid versions will be AWD.

We set off from Edinburgh and headed North towards Fort William, through some spectacular countryside, with roads that seemed to be attracting cyclists and European motorhomes and caravans, in similar numbers. But we were in no rush, we sat back in the luxurious seats, enjoyed the car and the surroundings.

To say the weather was changeable, is an understatement, but the car remained the same all day long, no surprises with it, it did exactly what we expected, the car was consistently good, whereas the Scottish weather wasn’t. 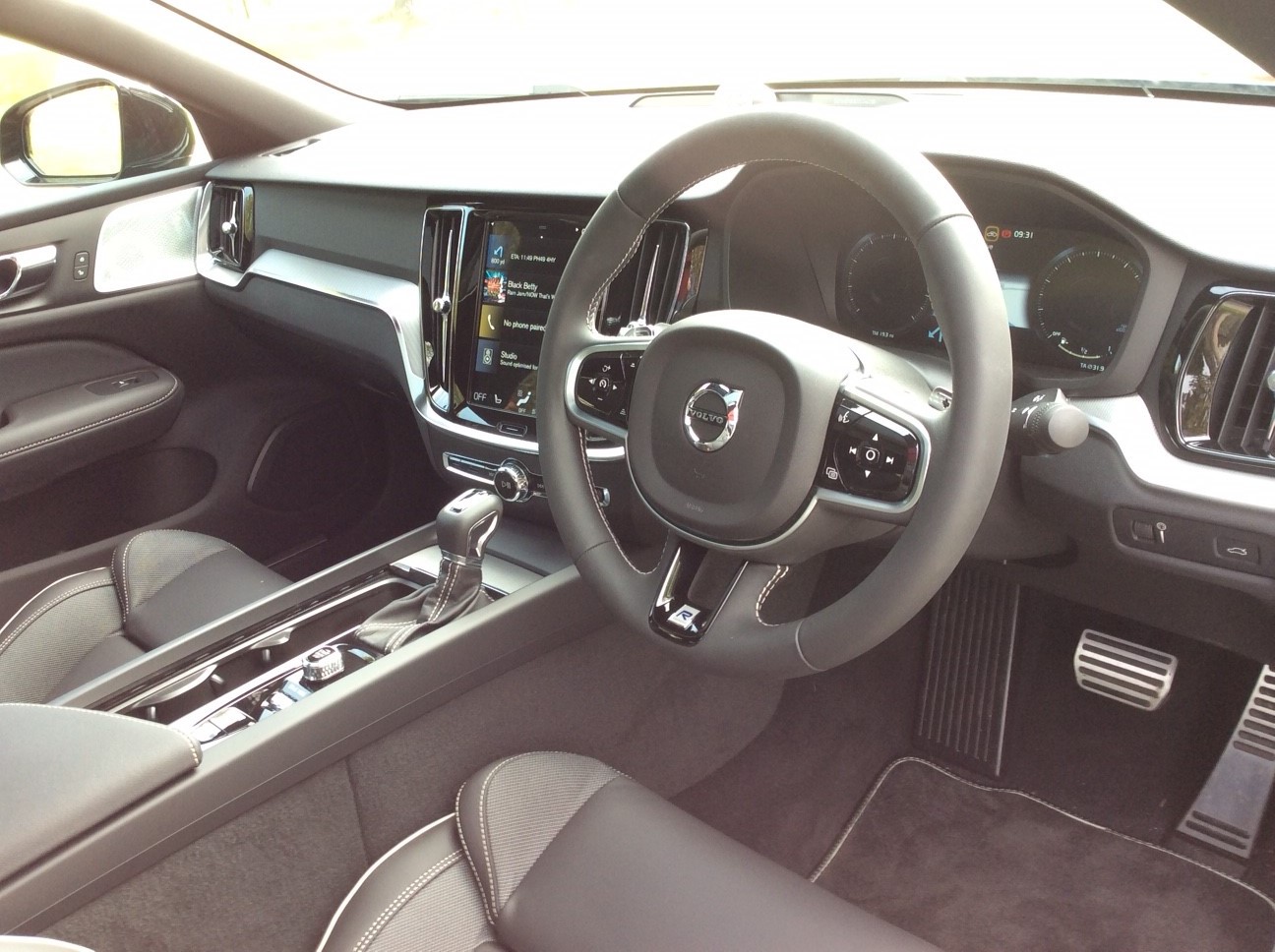 If you think this Volvo is Swedish, and just because it has Swedish flags on the front seats, forget it. It may have been designed in Scandinavia, but the fact is that it is assembled at Volvos’ brand-new plant in Charleston, South Carolina. This factory adds the United States to Sweden and China where Volvo’s are also built. This state-of-the-art (according to Volvo) will also build the next generation XC90 alongside the S60 in the next couple of years.

The lines of the S60 are bold and striking  and brings Volvo’s hallmark clean Scandinavian lines, with eye-catching details, that are relatively new to the company, a far cry from the Volvo of yesteryear, when they were dull and had flat, unsculptured panels, but that was their appeal back then – oh, how things have changed with Swedish design.

The interior is plain, and minimalistic, but it works, very Swedish, nothing too fancy, but it all looks good. The quality of material used is up to a very high standard. The dash is slightly odd, and we did talk about it while driving, it does appear to have a sharp leading edge to it – no flat dash, and on first inspection it does look as though it could be slightly dangerous for the front seat passenger, in the event of a front end collision, but on closer inspection, it does have a soft feel and touch, so will have passed every test known to the motor industry, and more besides.

There appeared to be plenty of room for four adults, with adequate space for shoulders, knees and head. To get three adults in the rear, might be a bit tight for a long journey: but that is the same for all cars in this sector. The boot looked large, and it is large, a total of 442-litres capacity.

Sales are expected to be higher than the outgoing S60, which only sold 960 in 2018, so this new one is bound to sell in higher numbers, if it doesn’t, then there is no justice.

This car is full of goodies, lots of toys, and of course, being a Volvo, full of safety, including Oncoming Collision Mitigation, Run-off-Road Mitigation and Run-Off road protection, and other systems to avoid accidents and protect the occupants in case of a collision.

The S60 has four Drive-Mode settings: Comfort, which is the default setting, ECO, for the lowest possible fuel consumption and emissions. Dynamic for a quicker response and Individual, which allows the driver to tailor each element to their liking.

After a drive of over five hours on a vast variety of roads in Scotland, we achieved 37.5 mpg on average according to the on-board computer, which we thought was pretty good for a car of this size, and with a large petrol engine.