Vauxhall catches the B SUV race

The Spanish built Crossland X measures 4,212mm compared to the Mokka X at 4,271mm, so just a fraction shorter, it is also 16cm shorter than the Astra Hatch. Some may be confused by the Mokka-vs-Crossland size but Vauxhall do say they will appeal to different types of buyers.

The Crossland X looks a bit like a ‘pumped-up’ Adam, has the same ‘floating roof’ effect , it has a bold design and looks every bit an Urban Crossover, which are becoming increasingly popular.

The lines are crisp and it looks good from every angle and is well proportioned. Vauxhall say the Crossland X embraces the company’s design philosophy of ‘sculptural artistry meets technical precision’, giving it a rugged, yet sophisticated finish. From the front, it is easy recognisable as a Vauxhall with a prominent grille featuring the Griffin, as well as Vauxhall’s signature LED daytime running lights.

Like the Adam, customers can order a different colour roof to give more personalisation and chrome strips can be added to divide the roof from the rest of the car. Black strips are available, but do not look anywhere near as good as the classy chrome ones. 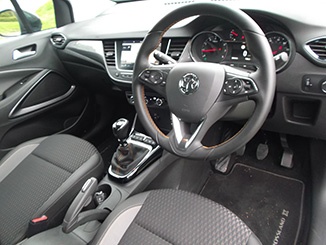 Despite the compact length of the car, the interior has been well designed and thought out, creating the maximum amount of space. The front seats are extremely comfortable and feature ergonomically first class seats to make long journeys as comfortable as possible. The rear seat passengers have plenty of leg and headroom and the rear seat has the advantage of being able to slide by up to 150mm to give either more legroom or luggage space. With the rear seats up, there is 520-litres and with them folded down, this creates 1,255- litres.

The dash and horizontally aligned centre stack are cleverly designed and easy to use and operate, everything seems to be in the right place and natural position. The driver has the benefit of a choice of comprehensive infotainment, a raft of driver assistance systems and Vauxhall’s OnStar is standard across the range. I would try to explain OnStar but I am struggling a bit with this technology although I do know it is something to do being fully connected to the powerful 4G/LTE Wi-Fi Hotspot… I’m still confused, but I’m sure a 7-year old understands it…!!

There are two petrol engines with 3 different power outputs. A 1.2 produces 81 PS and a 1.2 turbocharged version that produces either 110 or 130 PS. Also available is a 1.6 diesel that produces 99ps or 120ps, the petrol engines will be by far the most popular, as the popularity for diesel in this size and type of car is beginning to wane.

The range of SUV’s for Vauxhall and its current owner General Motors continues to grow and since 2012 Mokka has proved a huge success for them by selling over 120,000 in the UK alone, the Mokka has recently been replaced by the Mokka X. Then later this year GM/Vauxhall will introduce the larger Grandland X to the SUV range of vehicles.

We drove the 1.2 130ps around the very pretty Cotswolds and it certainly had more than enough power and I guess the 81 PS should be quick enough for most people and will be efficient too. 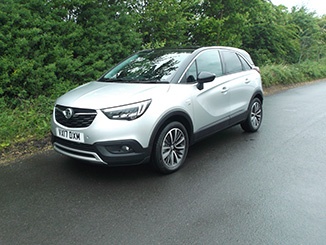 Before the drive commenced we thought we would be disappointed, or at least were expecting the worse. We thought the car would be just ok and  nothing special or anything to get excited about, just another small SUV about to join a very competitive sector with so much choice and nothing much to choose between them, as all are pretty good at a job they are designed to do. But the Crossland X (admittedly with a 130ps petrol engine fitted) was really quite a pleasant drive. It was quiet, refined and the seats, as promised, were comfortable; it was obvious a lot of time and money has been spent to ensure that backache is kept to a minimum. We were pleasantly surprised by this small SUV as it delivered what we had previously been told and you don’t always believe what you are told or read, but in this case it lived up to the hype.