The DB11 is nearly as good to look at as it is to drive.

Like the flag it has driven past many times, Aston Martin has had a chequered past, and most of it not good. The company got passed from one owner to the next, and has never really made any money for any of them, that is until now, as the current owners have turned it around and are now actually making money.

The DB11 comes in a long line of DB’s and follows on from the DB9, as only ten DB10 were produced with eight being for the sole use of James Bond, in the film Spectre. This all-new car is the most powerful and most efficient DB in Aston Martin’s history.

We collected the car from the factory in Gaydon in Warwickshire and drove it on mainly country roads around the county and what a great drive it was.

The DB11 is powered by a 5.2-litre V12 bi-turbo petrol engine, which produces 600bhp, it accelerates from 0-62mph in a very quick 3.9 seconds and has a limited top speed of 200 mph. But despite all this power and acceleration, the DB11 felt really quite timid on the small country lanes and through the small pretty villages of Warwickshire, it did not want to run away with you and felt as though it was just as happy going very slow, as no doubt it would be at higher speeds. 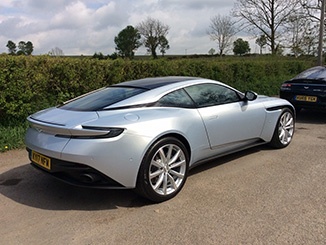 The DB11, like most Astons is a very pretty car, a work of art and something you can stand and look for hours, it is nearly as good to look at, as it is to drive. But look closer and it has some very clever bits of design and engineering. Aston have pioneered innovative ways of flowing air through its bodywork, with patents pending. The new technology for improved air-flow and stability is called ‘Curlique’ and the Aston Martin Aeroblade ™.  This system has been derived directly from their race cars. Curlique is a gill-like vent incorporated into each front wheel arch lining, reducing unwanted front-end aerodynamic lift. Neatly concealed beneath the clamshell bonnet, its design vents high pressure air from the top of the front wheel arches through recessed apertures behind the iconic Aston Martin side strikes. Further high pressure air is extracted from the back of each wheel arch through discreet stirrup vents positioned aft of the front wheels. This air ends up at the rear of the car to give downforce, improving stability, acting like a conventional spoiler.  There is a small active spoiler, which automatically deploys from the boot-lid to increase the effectiveness of the Aeroblade ™.

Aston Martin was founded in 1913 by Lionel Martin and Robert Bamford. The name came from Lionel who raced cars at Aston Hill near Aston Clinton and the pair decided to make their own vehicles and Aston Martin was born. In 1947 the Huddersfield gear and machine tools manufacturer David Brown Limited bought Aston Martin and put it under control of its tractor group and the sports car company starting building the classic DB series of cars.

The exterior design is superb but climb in the car and it is fantastic, it is completely covered in sumptuous natural materials, the highest level of craftsmanship and state-of-the-art climate control and infotainment. The cabin is best described as gorgeous, you look around and everything just oozes luxury, from the leather to the carpet, to the trim. 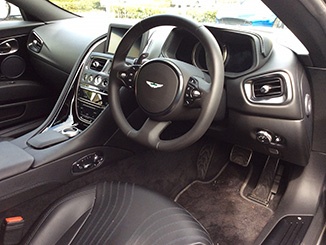 The interior of the DB11 is very modern with new switchgear including buttons, levers and switches and all are easy to find and use it is very intuitive. The level of standard equipment is good and includes: Strathmore leather, Alcantara headlining, memory front seats and exterior mirrors, heated front seats, cruise control & speed limiter, trip computer, full-colour TFT display, front & rear parking sensors with 360° cameras, laminated windscreen with clear noise-insulation layer, the list goes on and on.

The options choice is also impressive and can make the car very personalised, I would certainly go for the DB11 logo on the headrest, a very nice touch.

When you get into the DB11 you immediately feel at home, it just surrounds you and despite its enormous amount of power, it is so comfortable and with the right settings on the suspension you can get it as soft or hard as you need. I went for the nice soft option and it was as comfortable as a large luxury saloon. Choose the GT mode for exemplary ride quality or switch to Sport for added firmness and agility assisted by the new electric power steering and torque vectoring limited-slip differential. Or be brave and select Sports Plus, and the pussycat turns into a beast and awakens the true sports car within. The multiple driver selectable dynamics enrich the driver appeal and you can make the DB11 exactly what you want and how you want to drive, very clever stuff. 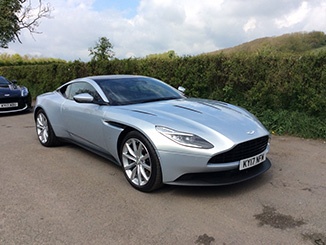 A 4.0-litre V8 503bhp will be offered shortly, then a Volante , which will only be offered with a V8, no doubt this too will be a stunning looker and a stunning drive.