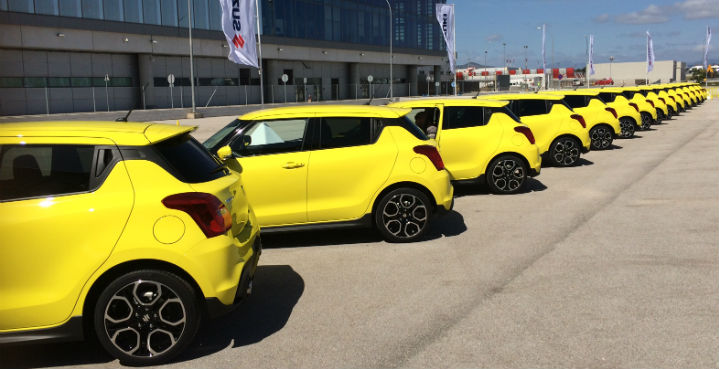 The Swift Sport is Suzuki’s Hot-ish-Hatch and first saw the light of day in 2006, the second generation went on-sale in 2012 and now the third-iteration hits the streets. In those 16 years of Sports over 11,500 have been sold in the UK.

We flew into Malaga, and the cars were lined up and ready to go. All were yellow, so looked like a field of daffodils, we jumped in, and headed off into them-there-hills.

The Swift Sport is powered by a 1.4-litre four-cylinder Boosterjet Turbo petrol engine that produces 140ps, and coupled to a 6-speed manual gearbox, it goes from 0-62mph in 8.1 seconds.

We left the motorway after cruising effortlessly at 130kph and took the twisty and interesting roads up into the hills. I think the idea of using this type of road was to really put the Sport through its paces and test its ‘Heartect’ lightweight platform, it’s enhanced braking system, it’s advanced handling capabilities, it’s new Monroe front shock absorbers, it’s optimised roll rigidity, it’s improved dynamic response, it’s 15% increase in camber rigidity during cornering, added degrees of stiffness, the extra thickness of the stabiliser joint bars to improve roll stability, and so the list goes on, to help it go round the corners better, and make it stop quicker. 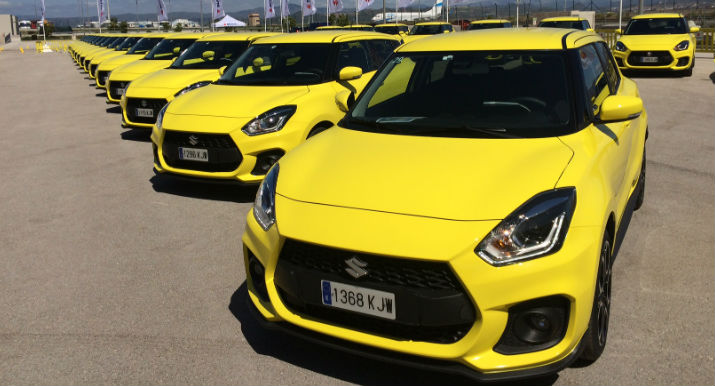 But in reality, we just had a nice gentle drive in the mountains taking in the spectacular scenery going up towards Ronda, no point in rushing when there is so much to see. We might put it through its paces and see what it is capable of though, on the way back down, after lunch, but not sure that is really a good idea.!!

The new Swift Sport gets a new and improved 6-speed gearbox that is more an evolution of the type used in the previous model. In development numerous enhancements have been made for optimum gear shift feel, which include the fitment of a new gear-lever with 10% shorter throw. Other modifications include the use of a triple cone synchromesh for first and second gear, and double cone synchromesh for third gear. The gear change did feel positive, with little movement between gear-changes, and did feel sporty.

A rear roof spoiler is standard and helps keep maximum tyre contact with the road by decreasing lift at higher speeds. Aerodynamics have been improved further with a new design engine under-cover, floor covers and front intake strakes. Wind resistance has been reduced by ten-percent compared to the previous Sport model.

The interior looks sporty with its red-stitching, and red features, which would probably look better with some other exterior colours, but didn’t really go too well with the bright yellow car we drove.

The sports-seats are firm, yet comfortable, and these are standard on the Swift Sport.

After a bit of lunch, we headed off back down the hills, and despite just eating we did try all those sporty features and it was pretty good going round all the bends, and braking was superb. But you have to be so careful on these Spanish mountain roads, as you really don’t know what is around the next corner, usually some cyclists or a tractor, or the compulsory Fiat Panda 4×4.

Suzuki have kept the Swift Sport nice and simple, with just one model, one engine, manual gearbox only, and 6 colours, with no extra charge for metallic paint.

The Swift Sport is not as hot as some hot hatches, but is still pretty hot, and for a price of £17,999 it is great fun, for not a lot of money.