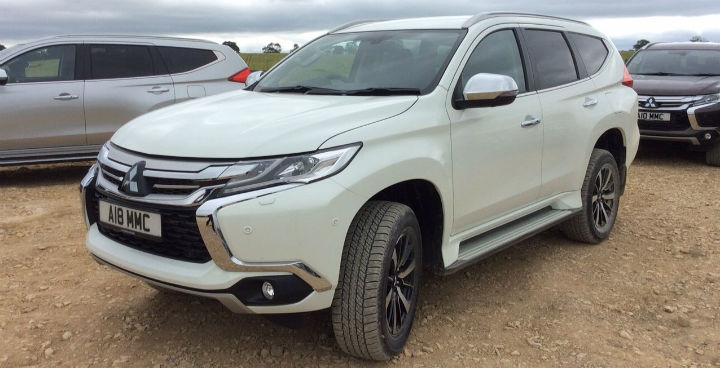 This new, large 4×4 is described by Mitsubishi as their ‘off-road flagship’ and they are probably right.

To keep it nice and simple, and I do like simple, there are only two models, a ‘3’ and a ‘4’ and both these variants come with leather upholstery and seven-seats as standard.

The level of standard specification on the ‘3’ is very high, and the ‘4’ gains: heated front seats, headlamp washers, adaptive cruise control, 360-degree camera, ultrasonic Mis-acceleration Mitigation System (whatever that is) and Forward Collision Mitigation, with these standard features costing £2,000 over the ‘3’.

This new, luxury Shogun is powered by a 2,442cc MIVEC Turbo diesel engine that produces 181hp, it goes from 0-62mph in 11 seconds, so not the quickest 4×4. This quiet refined engine is coupled to an equally smooth 8-speed automatic gearbox.

We picked up the cars, just outside Cirencester, a four-hour drive for me from Huddersfield, and just around the corner from Mitsubishi’s HQ in the UK, nice and handy for them, then..!! – we set off into the fantastic countryside in that part of the world. Then onto dual-carriageways and a bit of motorway driving. The Sport proved to be comfortable, and little roll of the body, and felt more car-like than big-SUV-like, hardly any rock-and roll.

This Mitsubishi is produced at their modern plant in Thailand, and was designed and engineered mainly for the Australian and New Zealand market, but Mitsubishi in the UK saw it, and wondered if it could be adapted for our small island. Not much has changed, just a few things to make it compatible with our Laws and Regulations. So a few minor changes, a long way to travel, and here it is. 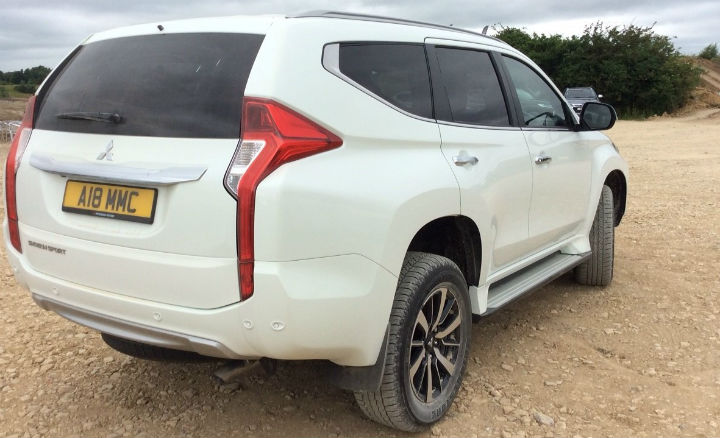 Due to the distance of the factory, and WLTP testing upon us, there are no options, just one model fits all, simple, for ordering and stocking, just the colour and the model is the only thing the customer has to choose – simples….

After the on-road drive, through the villages and at 70mph on the open highways, we went to a fully working stone quarry, with all the heavy machinery working hard to get out the rocks that will go to produce stone for new houses, crushed stone for roads, and concrete and stone for general building.

The team at Mitsubishi had created an off-road course that was quite challenging, and the tracks we used were really only meant for the heavy machinery with the right type of off-road wheels, tyres or caterpillar tracks. But we went up and down some fairly scary hills, where the hill-descent system was definitely needed. For these steep inclines you need to stop the car, put into neutral and select manually the correct transmission mode, such as 4-LOW with rear differential lock, via a dashboard button when still more traction is required. This Shogun Sport is the first Mitsubishi to feature a new Terrain Control System which offers four off-road driving modes at the touch of a button – no more handles and levers alongside the gear-shift.

After the up-hill, and down-dale on slippery, muddy and gravel surfaces, which we thought was bad enough, we then headed for a flooded part of the quarry. We selected the right setting, and set off into the water, at one point wading in 700mm of this dirty, deep water, over the bonnet at times, and you are just hoping the engine won’t cut out, or you get stuck on rocks beneath the surface, as there was no sign of any rescue boat, or the RNLI, the reason there was no sign, is simply because there wasn’t any. But the Mitsubishi did its job, got us through the ‘lake’ and back onto firm ground – well slippery mud and gravel anyway. Then it was back to climbing up and down them-there-hills.

The off-road course certainly proved that this Thailand built 4×4 is made for off-road, and more than capable of tackling the roughest conditions.

Seven-seats are standard, with the rear two okay for children, but a couple of adults would not be too happy going on a long journey in them. With the rear row folded flat, there is a huge space, and loads of room for plenty of cases of Fosters.

The exterior styling is modern, with some nice crisp lines, and it has a distinctive design, and although this vehicle was originally designed for a Southern Hemisphere market, it does fit in pretty well ‘up-north’.