According to the figures produced by the SMMT, 2,311,140 cars were registered in 2019, down 2.4% on 2018 – the third consecutive year that volumes have declined. Fleet registrations were relatively stable, up 0.8%, with private registrations down 3.2%.

In December, volumes were up 3.4% on the same month a year previous, with 148,997 cars registered, however, this does not mask the difficult year for the new car industry, with business and consumer confidence, political and economic uncertainty and confusion over clean air zones and emissions being contributory factors to the overall declines. Indeed, a proportion of December registrations can be apportioned to manufacturers seeking to avoid punitive CAFE targets that are in place in 2020, rather than due to natural demand, so registering cars in 2019 that could have potentially led to hefty fines if registered this year. Manufacturers that had a high percentage increase in registrations compared to the same month in 2019 were Audi, BMW, Citroen, Kia, MG, SEAT and Toyota.

Registrations of diesel-powered cars declined throughout 2019, down 18% for the year, with 615,705 cars registered, compared to 1,525,001 (+3.3%) petrol models (mild hybrids are included in these figures as we do not class these as alternatively-fuelled vehicles). This is a stark difference, considering that 4-years ago the volumes were almost on a par with each other. Battery Electric Vehicles (BEVs) saw the biggest increase in percentage terms, up 144% year-on-year, but still recording just 1.6% market share (37,850 registrations). Hybrid Electric Vehicles (HEVs) were up 17.1% with 97,850 cars registered and Plug-in Hybrids (PHEVs) were down 17.8% (34,734 units).

The following chart shows the share of the market in each month since the start of 2016, illustrating that petrol cars remain the dominant fuel-type, despite the rise of alternatively-fuelled cars. 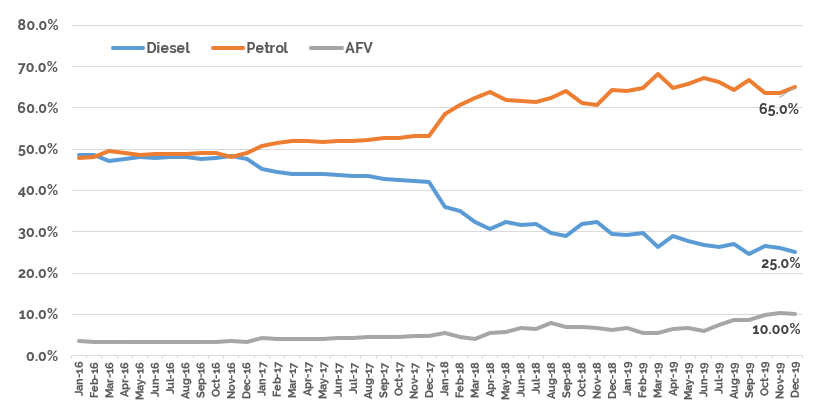 Daily Rental registrations in December are always of particular interest as they can often be a way for manufacturers to achieve year-end volume and/or market share targets. This is a low-profit sales channel with potential impact on residual values, so not always the most preferred route to sale for manufacturers. December 2019 saw an increase of 21% over the same month in 2018, with Ford, BMW, Renault and Volkswagen all posting increases, although Vauxhall still led the way in volume terms.

Over the course of 2019, Vauxhall remained the highest volume manufacturer in Daily Rental, followed by Ford, BMW, Renault and Mercedes-Benz. It will be interesting to see if there is an impact on used car values, particularly nearly-new values, for the more premium brands that have been increasing their volumes in this area over the last 2-years in particular.

So, what has the New Year brought so far? With the General Election and the festive period now already a distant memory, January has kicked off positively and it has been reported that it’s been a brisk and busy start for most used car retailers, with a high number reporting an increase in enquiries, footfall and sales. The uplift in retail activity was first noted from around Boxing Day to the New Year period and has continued to date with no signs of slowing just yet. The festive period is usually the time when a number of used car retailers tend to kick the year off with their sales campaigns and/or TV adverts, in order to draw in prospective buyers onto their websites and into their showrooms, by offering genuine savings on previously advertised prices or guaranteed low pricing.

January has, in most recent years, been the month where it can generally take a while for wholesale trading conditions to gain momentum and really get going, but the strong start to the year has broken this previous 7-8 year trend, and it is fair to say it has started with a bang!

Right from the very start of the year across the length and breadth of the UK, many buyers from franchised dealers, car supermarkets and independent dealers have been out in force in the market trying to buy up as much stock as physically possible. This is due to some operators going into the festive period with slightly less stock than in previous years, planned or unplanned, and the strong upturn in retail demand. Therefore, trying to replenish recently sold stock whilst retail sales remain high is the biggest challenge retailers are currently facing. If retail demand continues to remain high then this is only likely to be compounded further as we move into February where historically stock inventory falls to arguably the lowest points of year, due to the March plate change.

Buyers at auction, both physical and online, have faced fierce competition for most stock and have been forced to pay higher than previously paid prices in order to ensure they get what they came for, but quite often this has led to frustration and disbelief at prices being achieved, especially when prices are exceeding cap clean for ‘Average’ or ‘Below’ condition stock. ‘Bread and butter’, ‘price range’ and small to medium sized stock across all sectors have been most sought after, and almost regardless of condition, are attracting the largest amount of interest and high bidding activity, with sold prices in many cases exceeding well over cap clean.

That said, price sensitively still remains within the market place with sub £15,000 retail price point still most desired, but it is still the higher priced, late plate & low mileage, and the larger sized vehicles that still seem to be more difficult to sell from both trade and retail perspectives. If these vehicles are also in basic form with no optional extras, then these are generally making behind cap clean, and therefore pricing adjustments have been applied within cap live by the editorial team to reflect these sectors and vehicles of particular weakness.

The January cap hpi auction survey backs up the latest sentiment in the market place.

How does trade demand compare to the previous month? 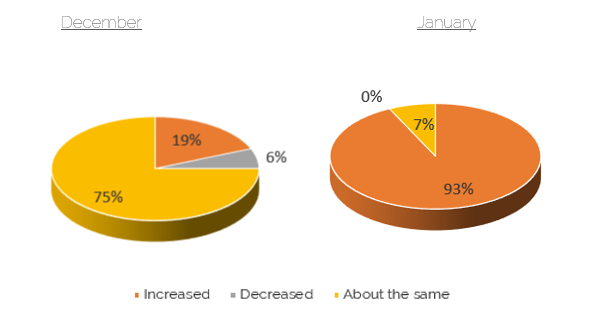 Nearly all the respondents reported demand had increased when compared to December, with only 7% saying it remains unchanged. This is identical to last year’s survey results.

How do your current stock levels compare to the previous month? 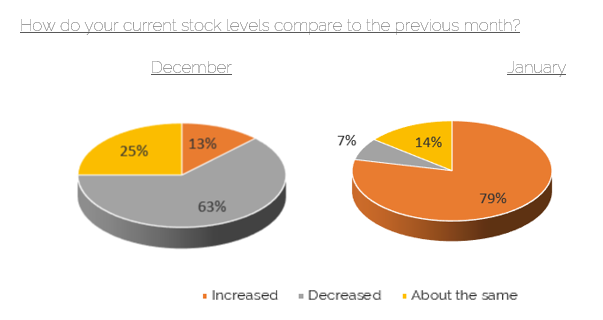 Stock levels have increased for 79% of the respondents in January with a further 14% saying it had remained the same, and only 7% reporting a decrease. This is likely to fall as we move into February as wholesale returns naturally decline in the build up to the plate change in March.

How do conversion rates compare to the previous month? 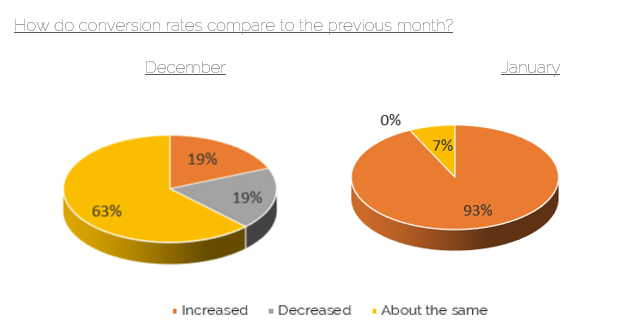 93% of respondents said that conversion rates had increased which is no surprise given the overall sentiment within this overview.

It has been reported that auction conversions have been anywhere between 80%-90% on average with some vendors even achieving 100%.

So, how has this affected Live valuations during January? Well, overall fairly positively which is unsurprising bearing in mind the general theme and sentiment captured within this overview. Monthly subscribers in February will see a cumulative value movement increase of +0.6% at the 3yr 60k point across all sectors.

Although there is a general feeling and perception within the market that valuations always increase in January, this is actually the first time since the introduction of cap live, back in 2012, we have witnessed a positive book movement during the month. 2019 saw a reduction of -0.7%, 2018 was down -0.6% and the average movement for last 8 years is down -0.4%, with no overall upward movements during this time. 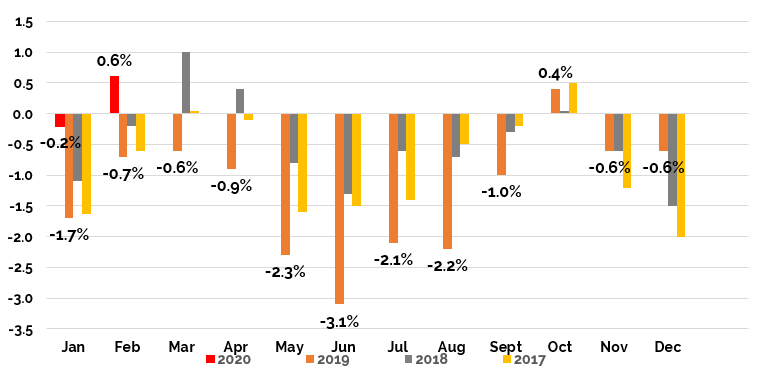 Particular strength has again been witnessed within the small car sectors during the month, with average upward moves for both City Car +2.6% or +£120, and Supermini +1.8% or +£111 at the 3yr 60k points. This again highlights the popularity, desirability and value for money that these price range cars offer to the retail consumer.

The lower medium sector has also seen another overall increase during the month of +0.8% or £62 at the 3yr 60k point. This is another popular size of car for the retail consumer and continues to be in demand, but only at the right age and mileage points. Some of the younger low mileage and late plated vehicles have come under pressure, and as always, supply and demand dynamics come into play especially if there has been some previous heavy registration activity for some brands. Hybrid powertrains within this sector have also fallen in value during the month. This could be down to the higher price points when comparing to the equivalent petrol or diesel variant, or the lack of understanding from the retail consumer for this technology.

The SUV sector has again been interesting this month. Whilst the sector overall shows a +0.4% increased at the 3yr 60k point, it is a very mixed picture depending on size, mileage and age. Large SUV’s have dropped by , Honda CRV 12-19, Hyundai Tucson 15-19, KIA Sportage 15-, Mazda CX5 17-, Nissan Qashqai 13-18, and Renault Kadjar 15-19 all saw values move up during the month of January.

Despite the average movement for the electric sector being positive at 3 years 60K the performance of certain models has been mixed.  Values for the Jaguar I-Pace (18-), Audi E-Tron (18-), Nissan Leaf (17-) and VW Golf (14-) Electric continue to see a reduction in values as pressure has either been applied from performance in trade disposal data or pressure being applied when benchmarking used values against current retail advertised prices for both new and used.  Some of the smaller low volume cars like the Peugeot ION (11-19), SmartFORFOUR (17-) Electric and Citroen C-Zero (11-19) have also seen values move back.  There has also been strong demand for models such as the BMW i3 (13-), Nissan Leaf (10-18), Renault Zoe (13-) and the Tesla model S (13-) which have seen values rise throughout January.

Upper medium performance has been slightly mixed overall. Later plated models saw a higher drop in value, with price and desirability being some of the reasons behind this. Dealer groups already had these cars and it is the older cars that they looked for to attract more interest from their retail customers. 3yr 60k saw more stability overall. These price range examples continued to be the type of stock that buyers looked for as these were the cars that fitted the stock profile for many dealers. Upper Medium stronger performance models included Ford Mondeo (14-19), Skoda Octavia (13- ) Diesel, Vauxhall Insignia (13-18) Diesel and Volvo S60 (10-18) Diesel.

The February wholesale market is usually one of strength and with this latest surge in demand and retail activity throughout January, we are likely to see another month of a strong used car market. With wholesale volumes naturally declining throughout the month, supply and demand dynamics could come even more into play and could just add some additional heat to an already heated and buoyant market place.

That said, it is vital for vendors and remarketers to keep a close eye on all sectors as not all of the market has been strong throughout January, and we could still see some price pressures for certain vehicles flow into February. Customers with cap live will be able to monitor any price fluctuations throughout the month in real-time.

The average monthly movement during March over the past 5 years is +0.2% at the 3yr 60k point. Last year saw a negative movement of -0.6% for the first time since the introduction of cap live but this was coming off the back of a very strong 2018 used car market and at the start of the market correction.